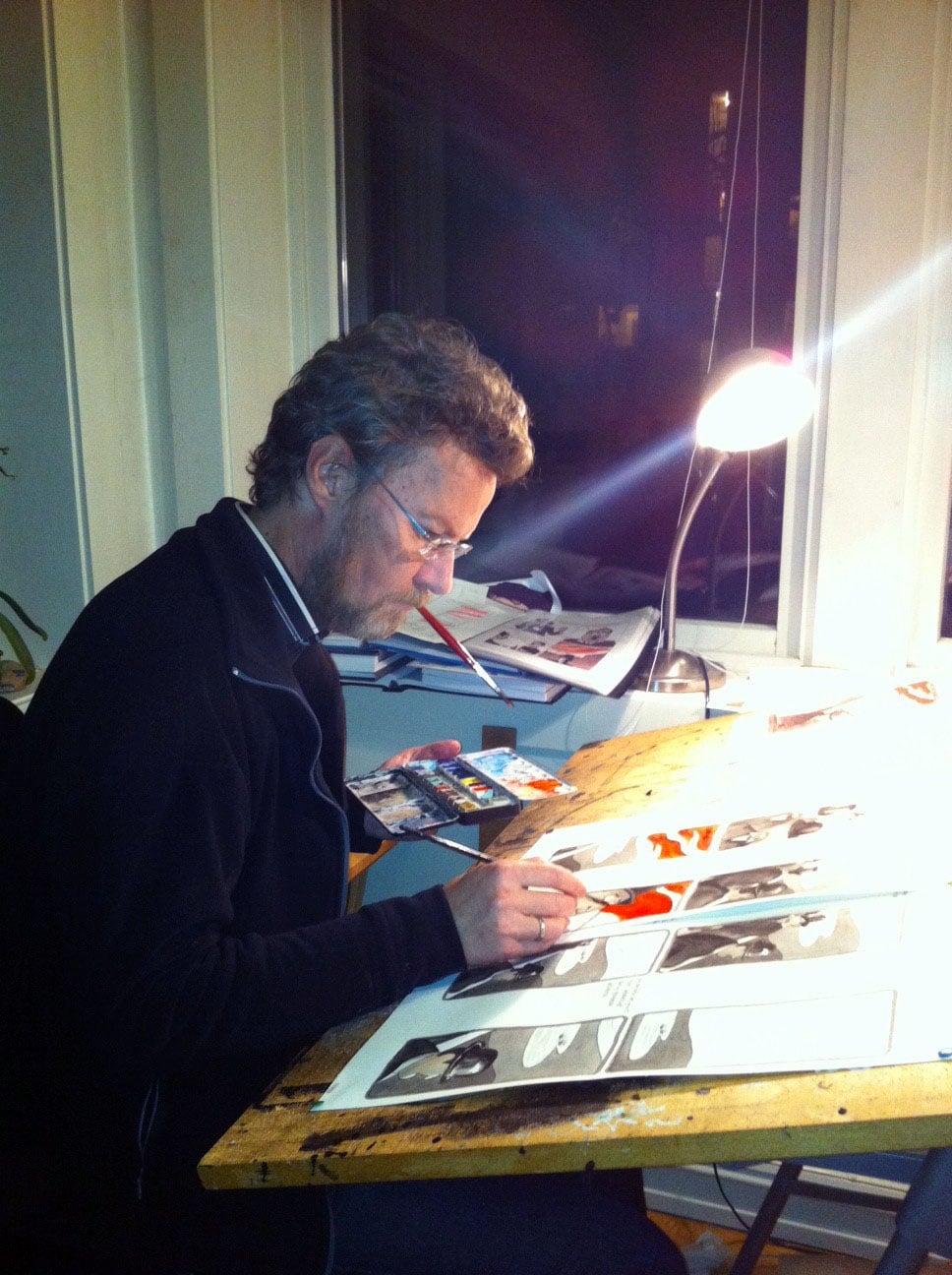 Steffen Kverneland (1963) is a Norwegian artist and illustrator, best known for his striking caricature biographies of famous artists, and comic versions of literary works.

Kverneland made his debut at age 16 in the Norwegian humour magazine KOnk. In the first part of the 1980s, he delivered a series of comics to sub culture fanzines such as Brage. He often drew under pseudonyms, one of them being S. Susej.

“The clenched fists”, Kverneland’s debut album, came out in 1993 at the small publisher Tegn A/L Bum. The album was based on an Øvre Richter Frich novel about “the Aryan giant” Jonas Fjeld. For this album he was rewarded the Sproing Award.

“Jonas Fjeld” was one in a series based on literary texts launched as “amputated classics”, where Kverneland in an informal and satirical way plays with famous literary works. In “Amputated classics” whole books may be reproduced to one single page, while others comprise small serials. The series (1994-2001) were later collected in four albums.

In 2001, Kverneland made a booklet about the poet Arne Garborg. The story focuses on the Norwegian poets life, not his work. The booklets logo and title “Garborg & Co” resembles that of Donald Duck & Co, and Kverneland has portrayed Garborg as a crazy drunkard, in contrast to the more common notion of him as an author and pillar of Norwegian national language. In addition to publishing books, Kverneland has also worked as a comic artist and illustrator for Norwegian newspapers like Ny Tid, Dag og Tid, Samtiden and Nationen.

Steffen Kverneland has inspired many comic artists. In 2004 he published Olaf G., together with Lars Fiske, an award-winning comic book biography of the Norwegian master illustrator Olaf Gulbransson. In 2006 Fiske and Kverneland published the first book of another project; a comic book Canon, who up until now has been published in five volumes. Kverneland’s contribution in this has mainly been a serial about Edvard Munch, the famous Norwegian painter. In 2013 a revised and expanded version of the story was collected in one volume – Munch, for which Kverneland was rewarded the literary Brage Prize in 2013.

In 2016 Vampire, yet another Munch story, was published. This time based on the assumption of a fictional and rather drunk comic book artist (Steffen Kverneland himself?) that Munch was a bloodthirsty vampire, hence his dramatic paintings.

EXHIBITIONS (selection)
Steffen Kverneland exhibited at numerous collective shows, among them the national Autumn Exhibition. He has also had a solo show at the prestigious Henie-Onstad Art Center and an exhibition together with Lars Fiske at Grafills R21 (Oslo) and Tegnerforbundet.
Works by Kverneland are purchased by the Norwegian National Gallery.

The paintings by Steffen Kverneland presented at Sunderø Gallery all comes from Vampire, a comic biography about Edvard Munch.
Vampire might best be described as a Gothic robber novel about the grim secret of Munch, the Norwegian artist best known for his painting, The Scream. The book is about betrayal, despair and sick love, seen through the eyes of a drunken comic book writer – most probably the author himself.

The book is partly sited in Oslo just at about 2020 and Christiania (Oslo´s earlier name) around 1890. Via Liv Jacobsen, curator of the new Lambda Museum in Oslo, the comic book writer discovers that there is made a startling discovery of new Munch materials at his summerhouse in Åsgårdstrand. Both unknown paintings and diaries are found.

Parallel to these discoveries several brutal murders are committed in Oslo. The victims are all bled out. At the museum an annoying and uncomfortable art collector appears, suspiciously like Edvard Munch and with a striking knowledge about the master’s lifework. Might there be a connection?

Vampire is built on the ailing artist’s fascination with death, blood and sunsets. Kvernelands pictures are symbolic and gloomy. The paraphrases of Munch likewise, and additionally sprayed with blood in horrid varieties. It is an amazing book, intensely invested in its subject.

Kverneland has for years been interested in literature. Samuel Beckett, and William Burroughs (especially his cut-ups) being two of his favourites. His works show the influence of absurdism and subversive, anarchistic stuff, but he´s stuck to the doctrine/dogma of not cheating with quotations; they have to be accurate.

Edvard Munch (1863 – 1944) is one of Norway´s major artists. His works obtain record prices at auctions, exhibitions both at home and abroad are well visited, and there has been an on-going controversy and quarrel about the building of a new museum in Oslo, displaying his art. Using Munch as subject for a comic biography is therefore a safe way to rice curiosity both by the art hub and among a broader public.

Kverneland´s interest in the artist derives from multiple visits to the Munch Museum and the National Gallery since childhood. Being familiar with the originals, he mostly used reproductions from his art books on Munch, on most of his re-drawings. Redrawing the famous artists works, making watercolour miniatures of large oil paintings, he had to analyse and study each brushstroke Munch made. “Translating” the oil paintings to watercolour was a time-consuming process and allowed him to contemplate and wonder at every brushstroke; what was accidental and what was deliberate, how much detail and realism, and how much abstraction Munch put into each painting. For Kverneland it was like making a concrete or physical analysis of the paintings, and he learned a lot from that process.

In his works Kverneland start out with a rough pencil sketch of the entire page on a small sheet of paper, and do the adjustments he feels needed until he´s satisfied. Then he transfers the motive onto a larger watercolour paper, and start sketching the actual drawings with pencil, following up with outlines using an old-fashioned dip pen and waterproof liquid ink, then adding the larger blacks with a sable brush. When it´s dry, he finally starts the colouring and shading with traditional watercolours. It’s very analogue and old school, but it is not as a statement against digital techniques. It’s just the tools he is familiar with.

In 2004, Kverneland and Lars Fiske – another of our fine artists – released their collaboration Olaf G., a comic biography about Olaf Gulbransson, the Norwegian master illustrator who worked for the German satire magazine Simplicissimus between 1902 and 1958. After finishing, the two artists wanted to work together again, but not as tight as with Olaf G., and since 2006 five KANON books has been released. They both wrote and drew the stories, and the by the looks of it, their collaboration was great fun.

After the first KANON book, Fiske started on what was to become the graphic novel Herr Merz (a biography of the German dadaist Kurt Schwitters), and Kverneland made the first chapters of Munch. The book took him seven years to finish, and may be seen as a predecessor to Vampire.