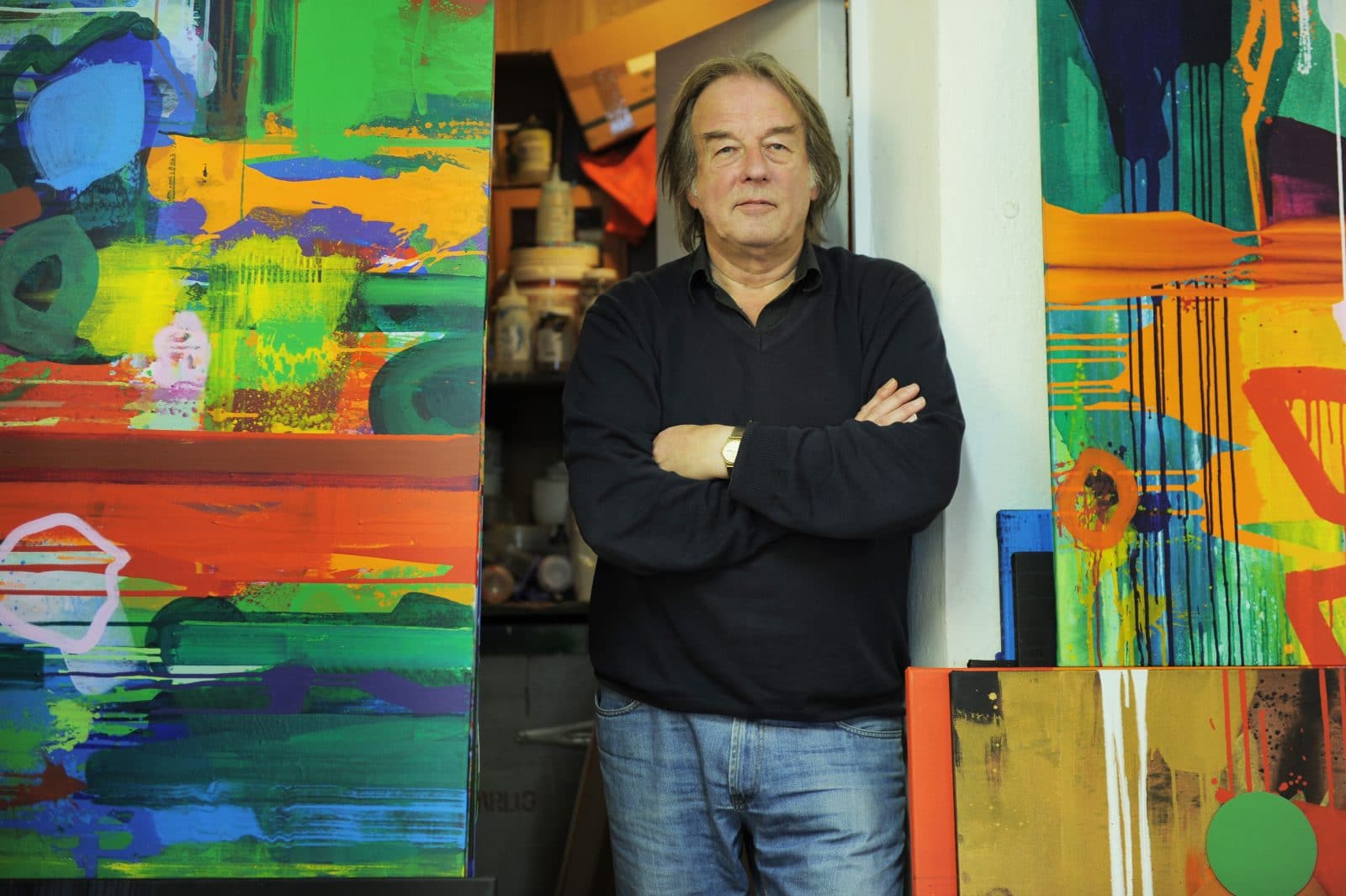 Terry Nilssen-Love, English artist born 1942, studied at Goldsmiths College and The Slade School of Fine Art in London. Shortly after finishing his education he took a post at Reigate School of Art, teaching drawing and composition. In 1974 he married and moved to Norway, first to Molde and in 1979 to Stavanger. In 1982 he became employed as head teacher at Rogaland School of Art, a post that he held in various capacities until he resigned in 2003.

Throughout his years of teaching Nilssen-Love exhibited regularly both as painter and printmaker. He is represented in both public and corporate art collections and has carried out several large, site-specific commissions including those for Stavanger Kommune, Oljedirectoratet, Tasta Idrettshall and Universitet i Stavanger.

In 2012 a monograph on the artists work was published by Labyrinth Press with English / Norwegian text by Lau Albrektsen.

Music, especially jazz has been an essential part of the artist’s life, and a source of inspiration for his work.
Photo: Courtesy of Emile Ashley

Works by Nilssen-Love available in our web shop

Whilst my work over the last few years has moved in a more free direction, as opposed to the earlier more geometrical structured compositions, what has continually occupied me has been the search for a balance between order and chaos and how far to move in either of these directions.

Perhaps this is a natural problem shared with many other painters as part of the process experienced whilst moving towards the “finished” work.

The question as to when a painting is finished is a difficult one to answer – the “final” brushstroke before signing the work is a myth perpetuated in novels. Perhaps a painting is finished when one simply stops in order to move on. Inevitably the next painting will be a continuation of the last, and therefore all paintings must represent a documentation of an ongoing process; so what is a finished and what is underway?

[blockquote author=”” pull=”pullleft”]“By merely painting an idea, or having an idea painted, the central act of creativity is removed, that is, the things that one discovers in the physical process of making the work, together with the intuitive decisions made along the way, and of course, a bit of luck. John Hoyland, 2000″[/blockquote]

I do not want to start and finish and then to start again, so I work on several paintings at the same time. The dialogue takes place not only between myself and a painting, but takes place also between one painting and another or between several works.

Sometimes one feels like the circus performer whose act involves keeping several plates spinning on a row of poles, i.e. which one requires attention next?

I rarely start with an idea as to how the painting should be – if I do, it never works, and any preconceived idea has to be abandoned or destroyed; at this point the painting starts to gain its own identity. Destruction is an important part of the process as is the accidental, though ironically one may ask just when is an accident an accident?

And how does one introduce the element of surprise?

Jazz, and by that I mean improvised music, has always been an essential part of my life and is reflected in my thoughts towards painting. The critic Whitney Balliet defined jazz as “the sound of surprise”. Contemporary European improvising musicians have long since used the definition “instant composition” – i.e. a work is composed as it is performed. One or more performers play together without any preconceived idea or musical notation. A successful composition comes about as a result of drawing upon experience and with an openness to a given situation. Could this approach be applied to the making of a painting?   – with a bit of luck.
Terry Nilssen-Love